A Need for Expanding Indian Research Beyond the Top Few Institutions

India has had a long tradition of scientific temperament and initiatives. Considering just the post-independence period for example, when it was still a newborn democracy struggling with all its socio-economic issues, Indian Govt. invested in nuclear energy and space research programs. This was also brought to the forefront recently in the web series “Rocket Boys” which helped bring Indian science into popular culture (although suffered some criticism for several “creative liberties”). Since then, Indian research has grown steadily. In the last 15 years, the founding of new government institutes (IISERs and new IITs) and scholarships (KVPY, INSPIRE) as well as private universities formed through philanthropic efforts (such as Ashoka University) has especially helped in accelerating Indian research output. This is quite evident by looking at one of the metrics of research output, the number of publications, over the last decade (obtained from Clarivate Web of Science, fig. 1). While this trend is promising, there are still several limitations that India currently faces which need to be addressed for faster growth. One of the primary issues, and the focus of this article, is the lack of a strong second tier of research institutions to complement the top-tier research institutes such as IISc, TIFR and several IITs. This article will discuss why this is an issue and what can be some possible solutions. 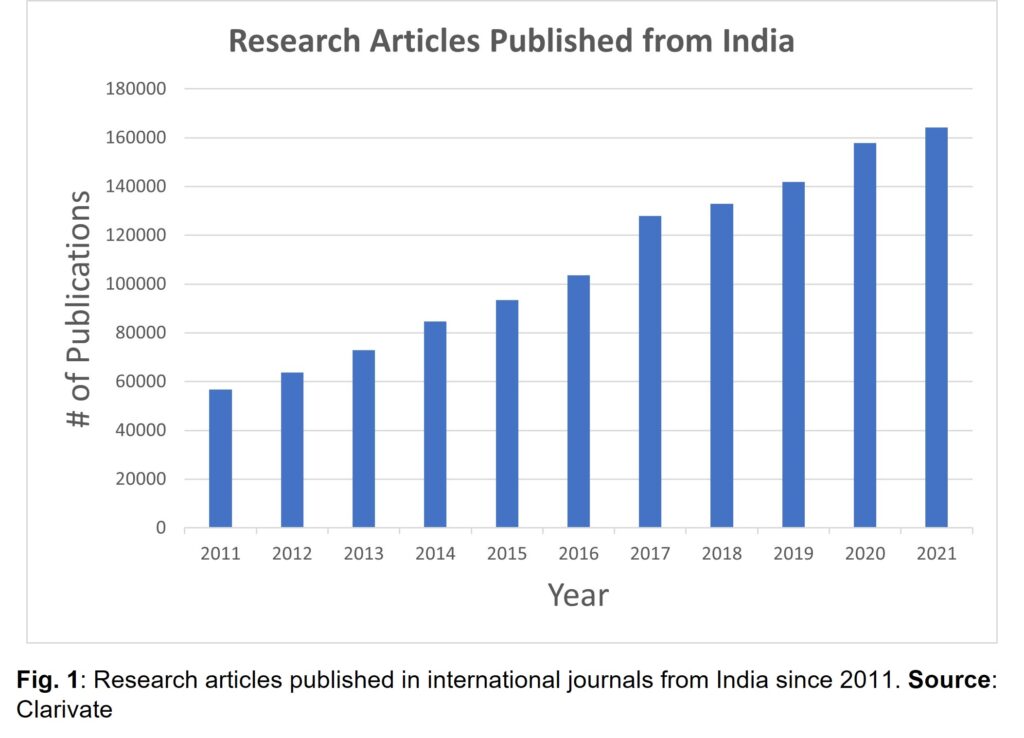 Many STEM professionals in India and abroad are eager to join Indian academia. This is evident from the large support Sci-ROI receives for its events and especially the recruitment drives where around 1000 applications were received for various jobs listed in the recruitment drives last year (2021). However, the prospects of doing cutting-edge research in India is limited to a handful of institutions. In our interview with Prof. Sudipta Maiti (Chair, Dept. of Chemical Sciences, TIFR, Mumbai), when asked about challenges in India’s academic system, he mentioned that if a faculty candidate fails to secure a position in top tier institutions for any reason, their research prospects can drop quickly. He further elaborates that we have “islands” (of institutes) where research is done well, and if a good candidate is unable to get tenure there, the next rung of institutes (mostly teaching focused) do not provide a conducive environment for pursuing quality research. Prof. Maiti mentions that while things have been improving in this regard, there is still a need for significant improvement and lessons can be learned from the stellar growth of universities in China and Singapore in the last 20 years.

To understand this issue more quantitatively, we can break down the publication data shown initially to look at the performance of individual Indian institutes. Looking at the top 150 institutes for the year 2021, the publication number quickly falls below 500 just after about 70 institutes (fig. 2a). Even considering the effects of pandemic on recruitment and research, pre-pandemic data from 2019 also shows a similar, if not worse, picture (fig. 2b). A comparison with China and the USA shows just how strong their research institutes are even at lower ranks in this list, where the last ranking institutes have 1491 and 2109 publications in 2021 respectively (fig. 2c, 2d). The data shown here is somewhat skewed as it does not consider the total faculty number. A normalization with faculty numbers can provide better understanding of individual research performance. For example, TIFR and Panjab university both have a similar number of publications in 2021 (1063 and 1052 respectively), however Panjab university has a much higher faculty number. Such normalization was unfortunately not possible here due to the lack of a centralized database with accurate faculty numbers for each institute. If we further consider only the highly cited publications, the issue becomes clearer. Here, a publication is considered “highly cited” if it falls in the top 1% of that particular academic field and publication year in terms of citations. The number of highly cited publications drops to single digits fairly quickly (fig. 3a, 3b). A similar comparison with the USA and China again helps drive home the point that the research needs to expand beyond a few institutes (fig. 3c, 3d). 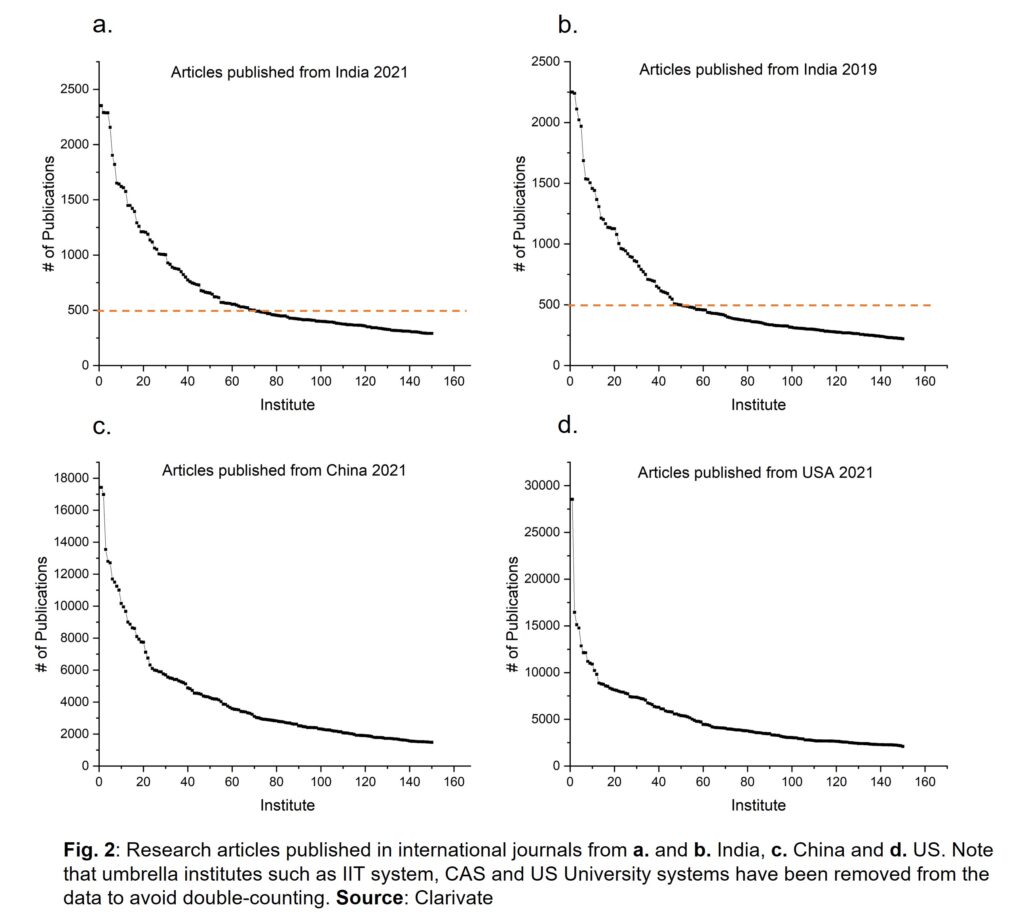 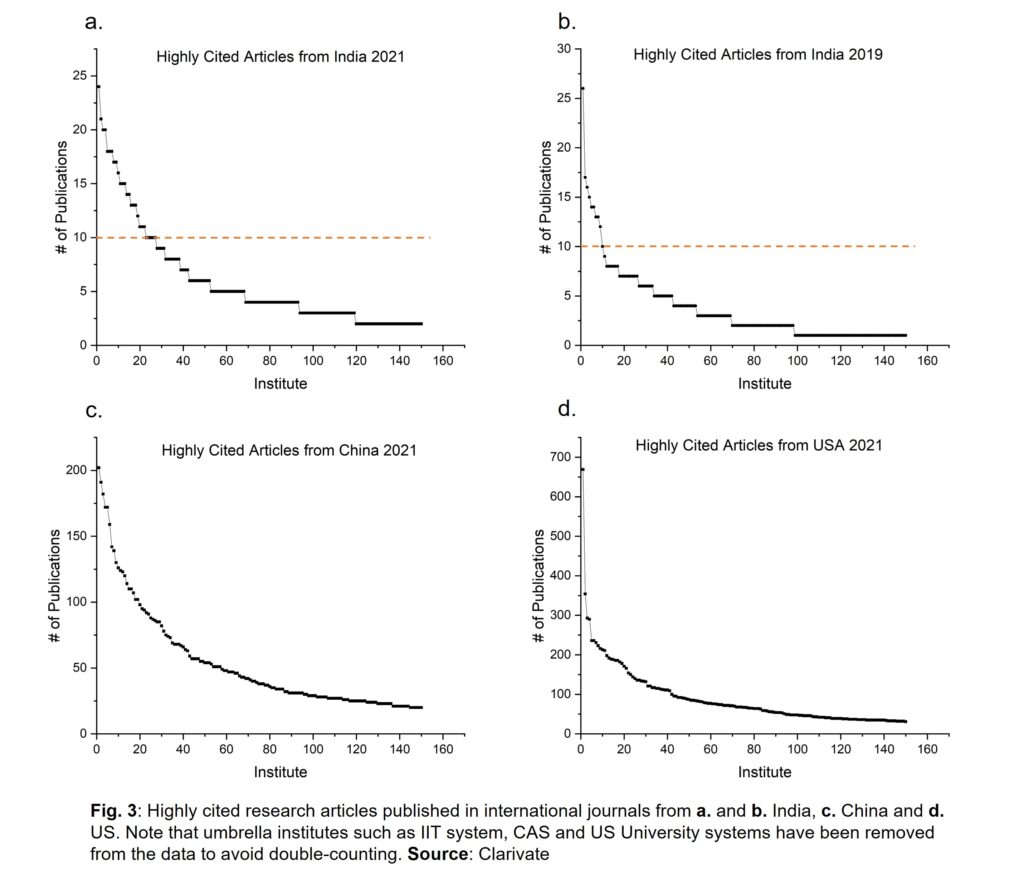 There are several ways to improve the current situation in India. To start with, it would be important to have a well-defined classification system to identify and distinguish research universities from other education institutions1. In the US for example, the Carnegie Classification has been the leading framework, which classifies institutions into research universities, masters colleges and universities, baccalaureate colleges, etc. The classification proposed in the National Education Policy (NEP) 2020 is a welcome step, where higher education institutes are classified into research universities, teaching universities and undergraduate colleges. Having identified the research universities, special funding can then be directed towards these universities with the express purpose of improving research output. A good example is China’s Double First Class University Plan (DFCU Plan), which replaced the previous project 211 and project 985 in 2019. It aims to develop elite Chinese universities into world-class institutions by the end of 2050. Under this plan, 147 universities (top 5% of overall universities and colleges in China) have been identified as DFCUs and $6.04 billion USD will be allocated to these institutes for opening new research centers, creating new partnerships and recruiting new faculty2. A similar plan is necessary in India and the National Research Foundation (NRF), proposed in the NEP, is a welcome initiative. The goal of NRF is to seed and facilitate research in state universities and other public institutions where research is currently limited. Rs. 50,000 crores over five years have been announced for NRF in Union Budget 2021-22.

Another possible strategy for helping under-representated universities would be to establish strategically located core facility hubs, which house research instruments which can be too expensive for a single institute. A lot of experimental research requires some crucial facilities and equipment (such as animal facilities for life science, characterization instruments like Scanning Electron Microscopes and X-ray Diffractometers for material science) which may not always be available due to lack of institutional funding. A hub where all these facilities are located can help several neighboring institutes. Currently, many larger institutes like IITs can offer their facilities to researchers from other institutes, but such facilities inadvertently prioritize in-house research. Standalone facility hubs can help in this regard.

One of the reasons behind high research output from the USA as well as Europe is that most of the research there is collaborative. Collaboration ensures that all aspects of a problem have an expert working on them. It also helps the growth of research in smaller universities collaborating with more established research institutes. A similar collaborative atmosphere needs to be fostered in India as well. There are some welcome initiatives such as Pravasi Bharatiya Academic and Scientific Sampark (PRABHASS) undertaken by Council for Scientific and Industrial Research (CSIR), which aims to develop a database and a platform to invite and encourage the Indian diaspora to collaborate with the scientists in India. Apart from this, specific funding schemes need to be created to promote networking amongst researchers, which can motivate faculty in institutes where research output is currently low. Under such schemes, existing platforms like IndiaBioscience and Sci-ROI@India that bring together early career researchers and provide mentorship programs, can be further supported.

In conclusion, the research opportunities in Indian institutions need to be expanded to provide home to the talent that is eager to join Indian academia. This will also help permeate the research culture to a larger population, producing even more talent that can lead India towards becoming a scientific powerhouse.

Acknowledgement: I would like to thank Shounak Bhogale, fellow Biophysics graduate student at UIUC, who helped with analyzing the data for this blog.

* The thoughts mentioned and discussed in the blog are of the blogger, and does not reflect the opinions of Sci-ROI team. 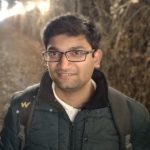