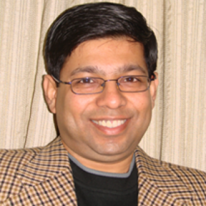 Dr. Jain obtained his M.D. from the University of Bombay, India (1997), and trained in hemato-oncopathology at the All India Institute for Medical Sciences, New Delhi (1997-2000) and at The Royal Marsden NHS Trust Hospital, London (2000-2001). He worked as an assistant professor at AIIMS, New Delhi (2001-2005) where he made significant contributions in developing the diagnostic flow cytometry lab and standardizing panels and protocols for flow cytometric characterization of leukemias and minimal residual disease in CLL. Subsequently, he joined BD Biosciences, India as Scientific Advisor (2005 till date) where he has played an active role in institutionalizing CD4 GLP training programs for NACO sites, giving shape and direction to structured training courses in flow cytometry (where more than 500 scholars have received hands-on training on flow cytometry during 2005-2011) and establishing several BD Centers of Excellence for education and training in flow cytometry. Since December 2010, his role and responsibilities have expanded to provide support on Clinical Reagents and Bioimaging products in BD Asia-Pacific Region. He is an executive committee member of The Cytometry Society-India (TCS) and is responsible for coordinating workshops and training programs.