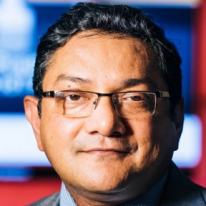 Prof. Rama Ratnam is a neuroscientist with a broad interest in brain and behavior. He is particularly interested in neurobiological mechanisms of sensory processing that give rise to perception. The senses that are the focus of his research are the auditory sense and electro-sense in weakly electric fish. Within sensory processing, his work is focused on coding, detection, and estimation of behaviorally relevant signals that are either at the limits of sensory threshold (i.e., extremely weak or faint signals) or corrupted by noise. The processing of near-threshold signals and noisy signals has an important survival advantage and has presumably been subjected to strong selective pressure. At the proximate level, a major consequence of selection is that it may have led to the evolution of an optimal neural code. This key idea has been elaborated in their recent work on an optimum neural code that is high-fidelity and yet energy-efficient. While this research helps to advance our knowledge of coding and signal representation in neurons, the biomedical applications are just as promising. One line of current research applies the optimal neural code to the development of improved speech processors for cochlear implants. If the optimal code is valid, i.e., if we have captured the correct representation of signals in sensory neurons, then damaged sensory organs or neural tissue can be replaced with bionic interfaces. Thus, this work holds the promise for improved neural implants.