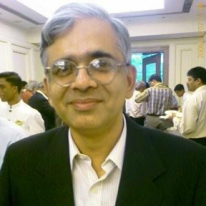 Professor Shekhar Mande holds a PhD in molecular biophysics from the Indian Institute of Science in Bangalore. He joined Professor Wim G. J. Hol as a post-doctoral fellow at Rijksuniversiteit Groningen in the Netherlands. He is a structural biologist and X-ray crystallographer. Professor Mande works on the structural characterization of mycobacterium tuberculosis proteins and the computational analysis of genome-wide protein interactions.
Professor Mande led the National Centre for Cell Science, Pune as its director from 2011 to 2015. He worked as a scientist C at the CSIR-Institute of Microbial Technology and as staff scientist (V-VII) at the Centre for DNA Fingerprinting and Diagnostics in Hyderabad. He was awarded the BM Birla Young Scientist Award in 1999 and the Wellcome Trust International Senior Fellow in 2003. He additionally received the Shanti Swarup Bhatnagar Prize for Science and Technology in 2005. He has been elected as a Fellow of the National Academy of Sciences, Indian Academy of Sciences (2003) and Indian National Science Academy.