What is life? How did life emerge from non-living matter? Can we create life from scratch? Since antiquity, these grand questions have caught the imagination of scientists and non-scientists alike. However, it was only recently that they came of age thanks to the emergence of synthetic biology. Traditional biology is about gaining knowledge on various processes in living organisms. In synthetic biology, such knowledge is applied to construct novel biological entities and functionalities that do not exist in nature. The concept of ‘synthetic cell’ lies at the heart of synthetic biology. It is an entity which recapitulates the fundamental features of life – namely, compartmentalization, metabolism, growth, reproduction, and evolution. However, synthetic cells differ from canonical cells in terms of the constituents and capabilities. For instance, a synthetic cell may be capable of making complex decisions based on Boolean logic or manufacturing a chemical that natural cells cannot produce.

One of the early demonstrations of ‘synthetic cells’ was made by J. Craig Venter’s team in Maryland, United States in 2010 when they fully ‘rebooted’ one species of bacterial cells into another species.1 The researchers synthesized the complete genome of Mycoplasma mycoides and inserted it into a closely related species Mycoplasma capricolum and the latter took on the characteristics of the former bacterium. Other noteworthy achievements that have been made so far include design of synthetic cells that can replicate their compartments,2 communicate through chemical signals,3 or perform artificial photosynthesis.4 Although the idea of synthetic biology sounds like science fiction, it already has a growing presence in industry and academia. Recent biological inventions like directed evolution (Nobel Prize in Chemistry 2018) and CRISPR genome editing (Nobel Prize in Chemistry 2020) along with guiding principles from engineering and physical sciences will likely enable synthetic biology to take the center stage of 21st century science.

Synthetic biology was introduced in India in 2000’s primarily through the efforts of Pawan K Dhar, currently a professor at Jawaharlal Nehru University (JNU), New Delhi and former editor-in-chief of the journal Systems and Synthetic Biology. Annual events like Indian Biological Engineering Competition (iBEC) and DBT Training Program played important roles in disseminating the ideas among undergraduate students and young researchers. Institutes like JNU, University of Kerala, Thiruvananthapuram, and the Institute of Bioinformatics and Applied Biotechnology (IBAB) Bangalore took early lead in synthetic biology.5 Gradually, research groups focused on synthetic biology have come up in various institutes – the groups of Sudha Rajamani (Indian Institute of Science Education and Research, Pune), Sangram Bagh (Saha Institute of Nuclear Physics, Kolkata), and Amit Ghosh (Indian Institute of Technology, Kharagpur) to name a few. Harsha Bajaj – a DBT IYBA Fellow, recently led a team at National Institute for Interdisciplinary Science and Technology, Thiruvananthapuram to publish an article on synthetic cells that mimic bacterial membranes in the prestigious journal Chemical Science.6 According to Bajaj, research funding is adequately available to support innovative ideas, but collaborative initiatives are not yet established in India. Prof. Pawan Dhar too thinks that there needs to be greater openness, networking, and community-building among young researchers to make this fledgling discipline thrive in India. Annual events like the Biological Engineering Society Conference (BESCON) are likely to play a greater role in this regard. Inspiration may also be taken from multi-disciplinary and multi-university efforts across the globe, such as MaxSynBio (Germany), Build-a-Cell (USA), BaSyC (Netherlands) and BrisSynBio (UK). The author himself was a part of a US Department of Defense (DoD)-funded Multidisciplinary University Research Initiative (MURI) on Artificial Cells during his doctoral research at the University of California, San Diego. This collaboration involved labs from several universities combining areas as diverse as chemical biology, soft matter physics, polymer chemistry, bioengineering, molecular biology, and biophysical chemistry. Pradipta Patra, a doctoral scholar at IIT Kharagpur thinks that, in India, eminent institutes like the IITs can offer a perfect blend of expertise in engineering and basic sciences to bring about successful collaborative outcomes in synthetic biology.

Synthetic biology is likely to become a transformative economic force in the near future. According to a leading market research company, the synthetic biology market stands globally at $9.5 billion, and it is estimated to reach $30.7 billion by 2026.7 Although India needs to catch up with the global pace, a few companies are already in the arena. For example, Jananom, a Coimbatore-based company has an ambitious goal of developing live biotherapeutics. Shriram Raghavan of Jananom explained the concept in simple terms – these are specially programmed bacteria that will produce a drug on demand at the desired site of action in the human body. Jananom also aims to develop economic routes to high-value natural products. Innovation hubs like C-CAMP, BioNest, and IKP Knowledge Park are likely to take a leading role in nurturing more of such endeavors.

India must capitalize on its young talents to make synthetic biology one of its leading frontiers. To attract the brightest minds, biology education needs a holistic and quantitative approach beginning from school level. Research institutes, consortia, and biofoundries dedicated to synthetic biology need to be established. Pooling of resources is extremely important in a developing nation like India where economic capital may be a limiting factor. For instance, India-based open access repositories (similar to ATCC, Addgene) for genetic products and cells can be beneficial for the synthetic biology community and beyond. Also, building robust networks among researchers will be helpful for purchasing and sharing of high-value research tools. In the US, ethical issues arising from ‘creation’ of synthetic life have been discussed immediately following J. Craig Venter’s seminal work of 2010.8 In the following decade, several nations including the US, the UK, Germany, Singapore, and Australia developed national policy and regulatory framework on synthetic biology.9 In India too, well-founded government policies assessing the safety and ethics of synthetic organisms need to be formulated. Problems need to be identified which are most relevant to the socio-economic needs of India. Let us consider a few hypothetical scenarios where synthetic biology may be applied. (i) Sequestration of CO2 from the atmosphere is the need of the hour to fight global warming. Synthetic organisms may not only help remove CO2 but may transform it to commercially useful polymers or nutrients such as proteins for human or animal consumption. (ii) A synthetic organism which derives energy from sunlight could be used for point-of-care diagnostic applications in remote areas. It will respond to an input (blood sample) and give a colorimetric readout. (iii) Arsenic pollution is endemic to many regions of India. A biosensor may help rapidly identify such pollutants in drinking water and neutralize them. (iv) Rare earth metals have enormous demand for power storage, but their extraction is technically challenging and environmentally damaging. Synthetic biology may offer an unprecedented solution to this problem.

The possibilities are endless and only limited by our imaginations! 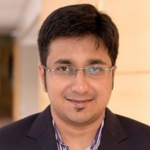 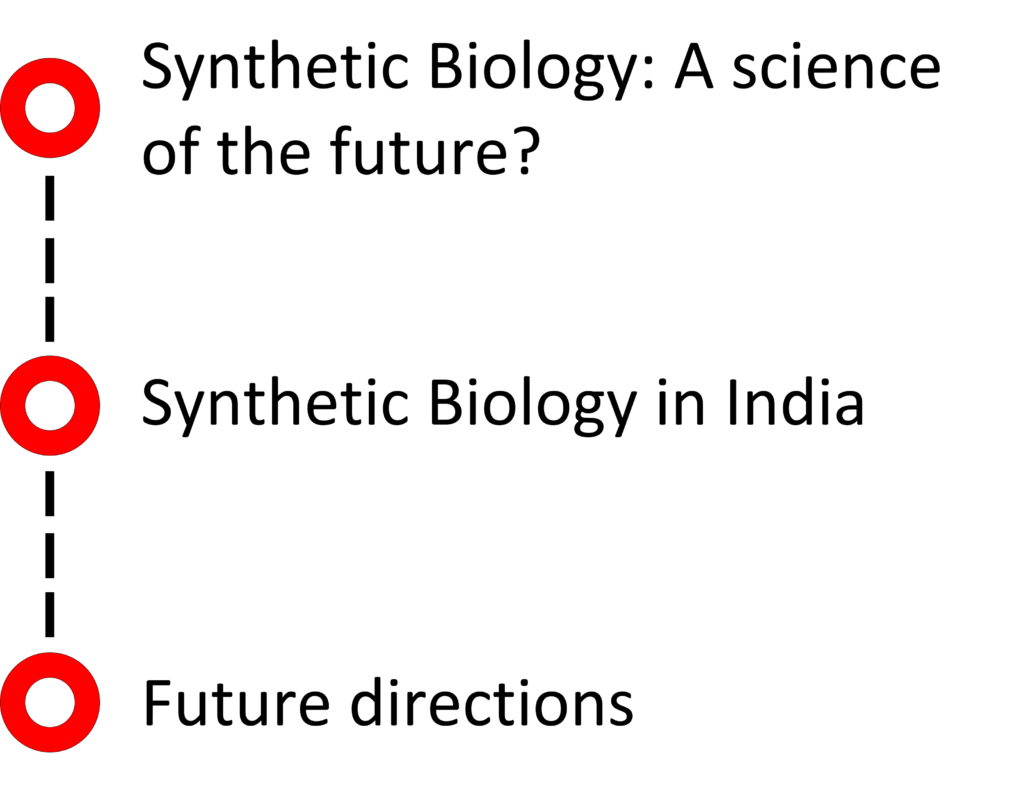 “Prof. Pawan Dhar too thinks that there needs to be greater openness, networking, and community-building among young researchers to make this fledgling discipline thrive in India.”